Endia Hayes (Sociology) recently presented groundbreaking work at the national conference of the African American Intellectual History Society. She describes her research below.

At AAIHS, I presented “Mouths in Moanin’: A Texas Chorus in Mapping Archival Excess.” This talk focused on Queen Victoria Spivey, an early 20th century Texas blues singer who created a blues subgenre called ‘moanin’ blues.’ My focus on Queen Spivey and her moans offers an open mouth epistemology, an intimate way of knowing the excess affect embedded in Black imaginative living within Texas’ unique slow, sonic landscape. Known for her “hard and nasal” voice, Spivey’s legacy spans not only Texas, but Michigan, Missouri and New York. She also worked with and behind more well known figures like Louis Armstrong and had a hand in Bob Dylan’s musical success. 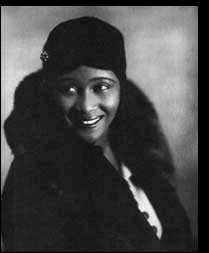 Under moanin’ blues, moans are a praxis. They are the long, low sound of one’s deepest expression of suffering or pleasure while simultaneously a lament. These slow moans Queen Victoria Spivey groans throughout her catalog is a tempo that stifles early 20th century interest in rapid material archiving. I study Spivey’s orality as an archive that opens Texas’ larger sonic geographies that prioritize slowness as method of feeling a Black Texas past. I, therefore, ask: What does an open mouth allow us to know, and more importantly feel, in refusal of archival material and its violence? Queen Victoria embraces a dis-ease, an uncertainty, and an overall opacity that comes with Black archiving. It assists with preserving sometimes materially illegible pleasures and escapes in Texas. Rather, her constant use of slow Texas drawls and tempos creates an archive. In other words, as Texas gospel singer Osceola Mays states “All they had to make music with was their mouths,” the sonic conditions and imperative of Black Texan women’s need for their mouths as means of alternative archiving is both sensual and apparent. Spivey’s moanin’ blues make her integral to Texas’ soundscape. This soundscape archives Black women and femmes stories over time; and in Queen Spivey’s case, some during times of extreme precarity where Black women’s knowledge production occurs along the interstices of intellectual orality: the breath, throat, voice, and in her case, moans. This chorus of slow drawls promise possibility in uncovering Black Texan livingness through sensorial archiving practices. As Saidiya Hartman beautifully writes "The chorus makes a plan, they draft a blueprint: move, escape…run away from everything hellbent on sucking all the life out of them” (2019:347). This begins with a moan.

This groundbreaking and insightful research is merely the beginning for Endia Hayes, as she continues to pursue her P.h.D. at Rutgers.